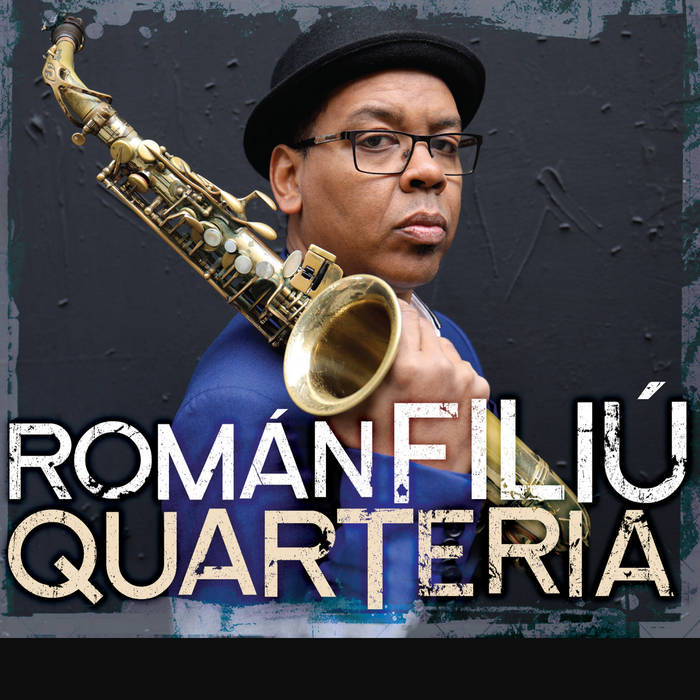 Six buildings in close proximity with families living one on top of another within a constant melee of sound, including music of all sorts. This is the public housing of Santiago de Cuba, known locally as cuartería. These apartments and their confederation of people and sounds serve as the inspiration to saxophonist and composer Román Filiú’s new musical suite and subsequent recording, Quarteria.

Growing up in the far eastern province of Cuba, Filiú was aware of music all around him. His father was a music theory teacher who encouraged his son to explore classical music scores. Filiú’s own musical studies began with classical piano before he focused on the saxophone. While visiting his friends who lived in the local cuartería, the budding musician was exposed to a wide variety of sounds of Cuban extraction, including liturgical music for Bembé, conga oriental, tumba francesa, classical, jazz, and popular music, the cuartería was Filiú’s own musical Tower of Babel.

Filiú left Santiago de Cuba some time ago. He continued his studies in Camagüey and at the Instituto Superior de Arte in Havana. He lived and played locally in Havana, including a stint in jazz super group Irakere, before he moved to Madrid, where he lived for seven years. Filiú has been in New York since 2011 and has made his mark on the jazz scene as a bandleader, composer, instrumentalist and collaborator of note, playing alongside well-known musicians like Henry Threadgill, Steve Coleman and Dafnis Prieto.

Upon receiving a commissioning and residency grant from The Jazz Gallery of New York City, Filiú was able to compose his Quarteria. His goal was to create a suite of music that involved an eclectic range of musical styles performed by a diverse group of musicians. In composing, Filiú utilized a number of methods, including writing by transcribing piano improvisations, playing his saxophone, singing the melody or even without the influence of an instrument, putting his thoughts straight to paper. Through the entire process, Filiú made sure that the pieces served improvisation.

The ensemble grew out of Filiú’s intention to have as full a sound as possible with as compact an assemblage as he could muster. The ensemble ended up as a septet with an additional horn on two pieces, all members being brilliant stylists and improvisers well-versed in a variety of musical traditions.

Trumpeter Ralph Alessi has been a frequent collaborator with Filiú in Dafnis Prieto’s band, the two having originally met while the trumpeter traveled with Steve Coleman to Havana. Dayna Stephens’ s sonorous tenor saxophone is a perfect foil for Filiú’s alto. Also from Santiago de Cuba, pianist David Virelles has been a long time collaborator and is responsible here for widening the ensemble’s panoramic sound. Bassist Matt Brewer was a must for his steady rhythm and expert time, while drummer Craig Weinrib is equally adept in support and widely steeped in rhythmic traditions from all over the world.

The suite begins with the staggering “Fulcanelli,” the piece inspired by its namesake’s study of the sacred geometry of cathedrals and which utilizes symmetry within its compositional makeup. Olivier Messiaen’s compositional style informed “Grass,” which was written away from the piano and utilizes expanded voicings between the three horns and the piano. The title of “Harina Con Arena” refers to the period of Russian withdrawal from Cuba in the 1990s and the food crisis that followed where there developed a common practice of adding sand to the cornmeal sold to the population. The piece is meant to have the jilting feeling of biting into that unexpected texture.

Utilizing hints from his choir director brother, Filiú wrote the beautiful “Choral” with formal voice leading, lending to the shifting harmonies within the instruments. On his week long Jazz Gallery residency at the Pocantico Center in Tarrytown, New York, Filiú composed three danzas at the piano: the improvised “Danza #5,” the Messiaen influenced “Danza #1,” and “Danza #3,” which was inspired by the rhythms of his childhood neighborhood comparsa ensemble, San Pedrito. The wonderfully disjointed “Glass” uses one melody, which is delayed a half beat between the parts, creating a unique counterpoint.

The stately “Imperator” mirrors the walk of an old Haitian refugee who lived near Filiú’s childhood home and who used to help the young saxophonist carry his horn home from school. Saxophonist Maria Grand appears on “For Horns and Bells,” which is a chorale and an experiment in conduction and voice leading. The final two pieces came from an idea to create crazy names and then write music for them. “Tursten” is a mysteriously laconic piece, while “Kaijufrem” is aggressive and utilizes a compositional system devised by Filiú in which he assigns a note to each letter of the name but then allows the structure to mutate from there.

The metaphor of a large edifice with people from of all walks of life comingling with the soundtrack of the music of Cuba is fitting for Roman Filiú’s Quarteria, which is an exceptional example of a lifetime’s exposure and dedication to the study of music in all its forms, coalescing into a moving musical experience.

Bandcamp Daily  your guide to the world of Bandcamp